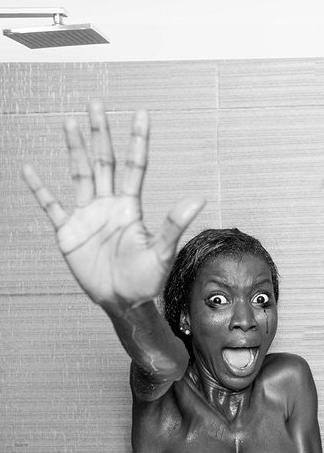 The hotel alarm clock activates, and a female robotic voice begins speaking. "it is 5:45 am time to wake up” finding my voice "Siri Snooze" she repeats "it is 5:45 am" "ah? Google Snooze?" "It is 5:45 "Alexa" pissed off I hit the snooze button.

It was an ordinary Wednesday morning. Traveling for work and being away from home has become routine and quite frankly my wife is starting to give me ultimatums. I can't help but feel an overwhelming sense of confusion. I rub my eyes slowly rising out of bed making my way to the shower; turning the faucet to “Hot” and WHOOSH! The vinyl lining billows inward; I step back pressing into the cold tile wall as plastic engulfs my body in a cloak of death. I am gasping for breath trying to peel the paper thin curtain from my face. As I make my final attempt for air, I feel this pushing on my shoulder, "wake up it is 5:45 am, the kids need to get ready for school." It's my wife nudging me out of bed.

It is pretty obvious that no one has died by curtain malfunction. Interestingly though, Scientist have been befuddled by this steamy mystery for years.

We have found three explanations on why a hotel shower curtain moves toward you.

One of the most prevailing theories is in fluid dynamic’s Bernoulli’s principle. In 1738 Daniel Bernoulli discovered that an increase in the speed of a liquid occurs simultaneously with a decrease in pressure. In layman's terms; Fast-moving water flowing from the showerhead lowers the air pressure, and therefore the higher-pressure air outside forces the air to find a balance and thus pushes the curtain inward.

Discovered by Archimedes of Syracuse in 212 B.C. supposes that the hot water from the shower causes the air to rise lowering its density. Therefore, the pressure in the shower will is lower than the pressure outside the shower, causing the curtain to attack you.

[iii]The study of mass and momentum:

However, the leading theory behind the shower-curtain result comes from David Schmidt, an assistant professor at the University of Massachusetts Amherst; he attacks the shower curtain problem with by calculating the mass and momentum of each droplet using simulation software. What the simulation showed was the shower droplets creating a vortex - very like a cyclone, that rotates around the associated axis perpendicular to the shower curtain. The low-pressure region at the middle of this horizontal vortex pulls the pall inward.

Yep, while at 1 st we thought it might have been a haunted shower curtain hoping you will meet your maker but later after some research we find it to be interesting scientific questions.

Now we tend to come back to the crux of the issue: How to stop getting rid of a clingy shower curtain? Good News! Hotels for humanity fixed the problem. Our shower curtain brands come with weights already sewn into the bottom of the curtains. Also don’t be afraid to pay a little extra for a thicker liner. A thick curtain comes in gauges between 7 to 10. Last Arched or curved shower rods conjointly will keep everyone happy. You can find all these items at www.hotels4humanity.com.